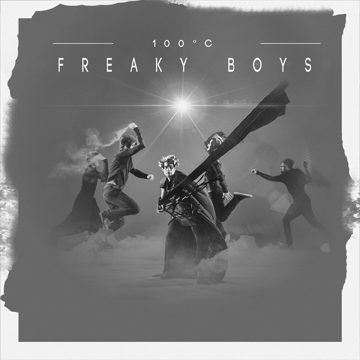 100°C - Freaky Boys is the fourth studio album by the band of Marianske Lazne, its unusual style is called Indie / Pop. On the album you will find many interesting guests such as Sabina Feldman, Ales Hyvnar, Petra or Mikovec gave the duo Kieslowski.

From the wild west once came a group called 100 ° C. After the third album Brant Rock , its members fled into the woods. When, after five years, reunited , telling each other what they have for a long time happened . Stories were meeting space and their intersections created the opening ode Freaky Boys. Strings drank more narratives and songs Nobody Feels Good and Eye for an Eye were visually depicted bass player Ondra Urbanec . Current Clip Eye for an Eye had recently spun the eyelet. Jakub Johánek plate produced in collaboration with Alex Hyvnar (Al- Yaman , ex - Cartonnage) , who participated in the recordings Toxique , Tara Fuki - , Yellow Sisters , Mikkie , Mako ! Mako or KOFE IN - remixed and in the past such as the famous Transglobal Underground . Fresh air permeated with new tracks taken hold and the upper floors are slightly kývou . Honey caressing vocals Sabine Feldman also torn clumps of musical stream , which is dense feel strikes the drum kit and subtle percussion Ales Hyvnar . If you can hear electronics over the tribe climbs to new heights and bears fruit.